On Swearing and Being Real… 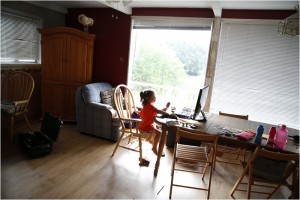 Adelaide busy at work at my desk at camp last week 🙂

Last night a very famous photographer  was “outed” that she has in fact been plagiarizing a good portion of her tweets. To most of us, we were amazed at her ability to be so witty and funny all the time. How do we ever live up to such awesomeness on our own Facebook fan pages and Twitter feeds? When we all found out tonight, for some it was a sigh of relief that she isn’t as amazing as we thought. Others: outrage. For me it was a let down. Her number one soap box has been authenticity. Listening to her speak helped us in so many ways when we first started our business. She brought it to our attention that our business is all about Ben and I. Who we are and how we want to run our business for our couples who choose to work with us in our specific way of how we take pictures. We needed to focus on us and not what Joe Photographer down the street was doing.

I found out about the plagiarism on another nationally famous photographer’s Facebook page who posed the question of yay or nay on agreeing with the person who outed Jasmine Star. The interesting part to me was that this photographer had decided to swear in their Facebook post asking the question about yay or nay. The thread quickly became about the fact that she had sworn in her post=lack of professionalism. Then people began backing her up, that they loved her for being “real” and “swear all you like”. I found it interesting that there are those who think “being real” equals swearing. Like we all wish we could just cuss a whole bunch and it just sucks that we have to hold it in for sake of professionalism, common curtsey or what have you.

Ben and I don’t swear. It isn’t because we are hiding our “real” selves.  We just don’t feel the need to. So this got me thinking. Being a Christian since I was in the 3rd grade and being around more Christians than non-Christians growing up, I actually remember thinking the opposite. I would hear a girl at school swear and I would think to myself “she’s not being real. She’s trying to be ‘cool’ by swearing, but that’s not who she really wants to be”. I projected who I am on others and decided that if they weren’t acting like me they weren’t being real. It was a revealing moment to me that the next time I think “oh they are just putting on an act” that I need to stop myself. This very well could be who they are. It’s just not who I am.

We may not be super funny or witty, but we do love taking beautiful pictures of people getting married!