Our Bathroom Remodel is {almost} Finished!

We still have a few more things to do in the bathroom before it is fully finished, but I was too excited to not go ahead and post something. As some of you know, we live with Ben’s parents right now. Yes, we are that lame couple in their 30s living with their parents, lol! We moved from Ephrata to East Wenatchee last June. Ben’s parents offered to let us live with them while we sold our house. We had a buyer in the first month, but it took 6 months to close! That is a whole ‘nother story. Anyway, our house closed in February. During that time Ben’s sister suggested a great idea. We are now in the planning stages of building a mother-in-law house next to Ben’s parent’s house. They will move in there and we will buy their old house. Ben’s parents are apple growers, so we live on an orchard. A house with acreage, high speed internet, and useable land is almost impossible to find. We love that the property is out of town but still has high speed internet and is only minutes from Costco. And you all know how much we love Costco!  Also, the house they have now requires going up a flight of stairs to get to the front door. Although Ben and Ruth aren’t there yet, they have friends that can’t come over due to having to climb those stairs. So their new house will be single story with zero stairs. Ben and Ruth built this house themselves over 30 years ago. Now we get to follow in their footsteps!

We will be remodeling (what will be our house) after we build their house. Because we will be living with them for the next year while we build (we will be doing most of the work) we decided to go ahead and remodel our bathroom now. It was an eye opening experience to say the least! Remodeling is known for being much more difficult than building new. This itty bitty bathroom was no exception! Every little thing along the way had an issue. Ben did most of the work with his dad’s help and me working on the clean-out, shower tiling and clean up (and of course voicing my very opinionated ideas on the look of everything!). Ben re-plumed, rewired and stripped the bathroom to the studs. Between work and life it took 2 months to finish.  We haven’t done the ceiling yet. We will wait until we remodel the bathroom directly above this one to finish the ceiling. We didn’t want to have to tear down a ceiling to get to the plumbing or whatever in the floor above.

We now get to enjoy the fruits of {mostly Ben’s} labor! And you can too! We love to entertain, so invite yourself over to our house. It’s prime bbq season!

Before and After. All the furniture came from Ikea. I think our entire house will end up being a mix of Ikea and Lowes.

Getting rid of clutter is such a freeing feeling! We had to put the shelf on the left instead of centered due to the water pipe. Thankfully we didn’t drill into the pipe before figuring that out! We still need to finish the lower half of that wall. Ben wants to make sure he can have access to the stuff there, so we are looking for some form of wall piece that you can just take out when you need to. 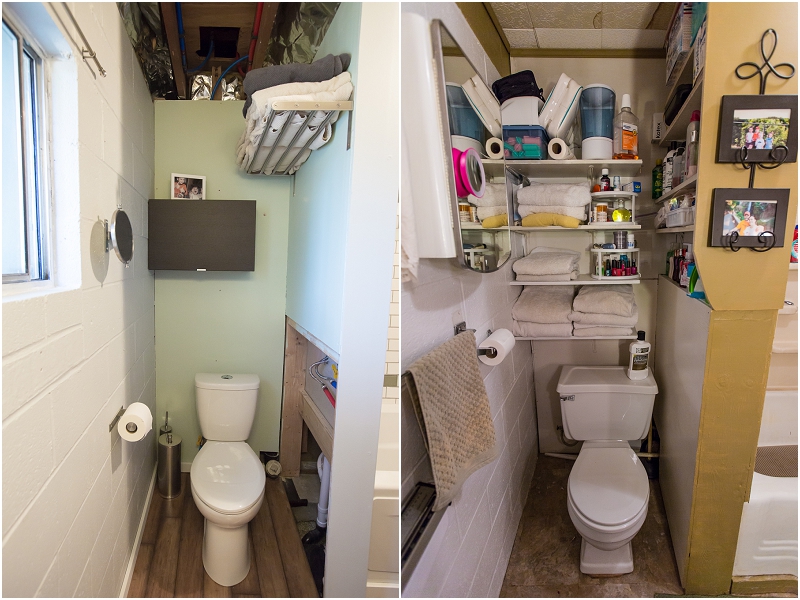 Tiling took about 18 hours. I am not sure if I was crazy slow or that is normal, but now I know why people pay the money for the 12×12 tiles! The subway tile was a fraction of the price of the 12×12, but it was much more time consuming to ensure things were straight and level. Ben loves taking baths. We decided we wanted our friends and family who spend the night here to be treated to something special. So we forked over the extra cash for a soaking jetted tub. The kids are in love with it!

This shower head lights up. Yes people. Come to our redneck home and feel like you’re in Vegas! Lol. It lights up from blue to orange depending on the water temperature. It also has misters. So happy to be done and have a clean house again!