“Puppies 4 Sale”. That sign gets me every time. Ben and I tried to have a dog, twice. Once when we were first married. George, a mutt from the pound, did not like Ben. No matter what we did, he wasn’t fond of him. So we gave him to a friend. Then a year later we tried again with Lucy, the beagle. A loud, howling beagle. With us being gone so much, that didn’t work out. So 4 years later we have a son who is afraid of dogs. Big time! His whole body trembles when one gets close to him. We’ve been trying  to help him. One of those ways, being stopping by places that have puppies for sale and having him pet them. On Friday we did that, but this time was different. Harrison actually enjoyed playing with it. Maybe because the puppy weighs like a pound, but it didn’t matter. I was so happy that Harrison wasn’t deathly afraid! Ben felt the same way, so the next day we went back and got him. Harrison and Adelaide are l-o-v-i-n-g it! Ben named him Springfield (after the gun maker) but Adelaide heard Sprinkles. So we shall see what name sticks, lol. And now we get to try out pet photography. Not really my cup of tea, but still something different I haven’t done much of yet!

Kids in their Easter clothes and a puppy?! Pretty much isn’t much cuter than that! 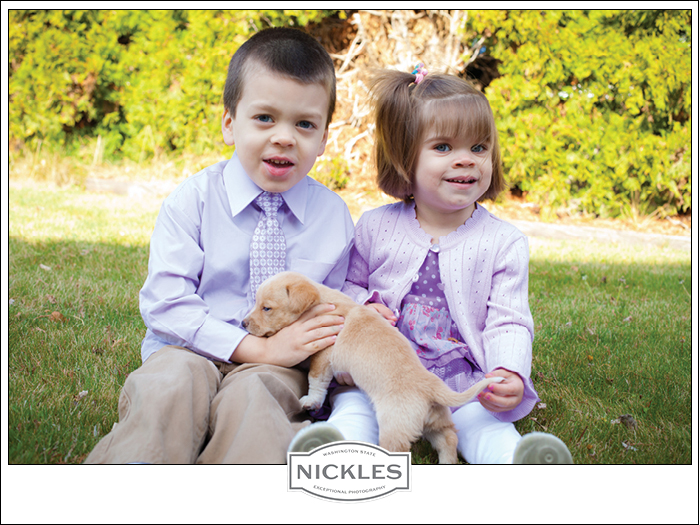